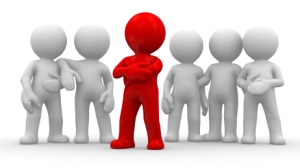 Conservative Party: to be a member you have to pledge your undying 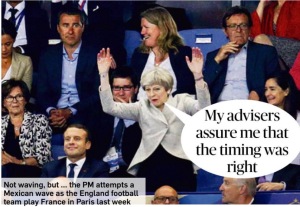 loyalty to the cause of the party, to the complete and total disregard of the needs of the residents, the truth, or implementing effective government.  You will be required to compromise every ethical standard you have ever held, and if you can’t agree to that then you will either quit or be forced out.  As 2/3 of all the Conservative MPs have no connection with the area they 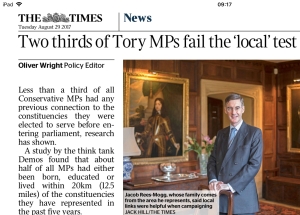 represent, it is quite easy for them to make the moral compromises they need to make in the name of the party.  After all they have no parents, siblings, other extended family, or even friends to help them and remind them of who they are and where they’ve come from.  Increasingly, this is true at the lower level as well.

Labour Party: pretty much the same as the Conservatives, but you have to find a way to get past a throughly unelectable Prime Minister.

The others? Pretty much irrelevant unless the two main parties can manage to get it shockingly wrong and implode, which one can never underestimate…

So, what are the common factors amongst the people in the system who are primarily there to represent the party:

The solution?
1-eliminate the strong leader provision to allow incompetents to be removed with a vote of 15% of the members
2-term limits of 2 terms
3-electronic voting to allow full participation by the electorate
4-demand full consultation using technology of all county-wide issues
5-all representatives need to prove they have lived in the area they represent for 5 years or more