I’ve struggled with what my role should be in several local dramas lately, and finally come to grips with the real issue(s). The first is the issue of the now infamous parking problem in Camberley on the A30 slip road. 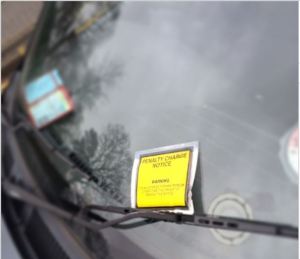 So, several months ago, the Local Area Committee headed by Chairman & County Councillor David Ivison and Vice Chair Chris Pitt, allows a change in the parking regime in Camberley that had been in-situ for a couple of decades. Parking in town centres is one of those things that is a rote task for most humans, and if you change it, you’d better make provision for the change of the very human rote nature of the task conditioned by more than a generation of drivers. Chairman Ivision and his colleagues authorised 12 dedicated parking spaces and 23 others for the use of some newly imagined set of residents for some of the flats in the Camberley Town Centre, and made no provision for effective implementation of said decision. Now it would be one thing if there were a requirement for dozens of spaces, but so far there have been 4 parking permits issued for this sacred space.

For those of you who don’t really understand local area government, which is mostly everyone including most of the people in local area government, County Councils deal with roads and highways, and Borough Councils (us) deal with enforcement of the parking laws on those roads, as they are. So, the newly minted law(s) of Ivison, Pitt and Co. were turned over to Surrey Heath Borough Council who attacked it with a merciless lash, a thrash, and a smash to the public. So far they have issued over 1,000 tickets to protect those precious 4 permit holders and now successfully conviced over a 1,000 people never to come to Camberley again.

What has happened is incredibly wrong on a whole bunch of levels. Everyone is blaming everyone else, but the flaws in the situation are undebatable.  At the core of it, everyone who is a part of this mess is demonstrating complete disrespect for the people who’ve been quite innocently “busted” for something they didn’t even know they were doing wrong, including several Councillors.

Disrespect for people is shockingly wrong in too many ways to count. But when you defend the disrespect created by the mess, and you pour contempt on top of the disrespect, there is no excusing it… So, when the CEO of Surrey Heath Borough Council announces to the world on twitter that the “new” parking regime is part of the Borough’s Local Area Plan, she is heaping contempt on the shocking level of disrespect that her employees are piling on our mostly innocent residents. The amazing thing is to watch people who are paid by the very voters they actually work for, try to justify the total lack of respect being shown to those very voters and then to compound that insensitivity by pouring contempt on those very same people.

4 Replies to “Disrespect, and then Contempt”