Did they come up with this on the “schools” section of the “away day” at the Farnham Castle??? 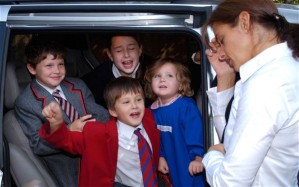 How have we got to the point where a school in Surrey refuses to allow children to walk or cycle to school?

By Telegraph View; 7:54PM GMT 22 Feb 2013
A school in rural Surrey has declared that from September it will be “driving only”. By this it means that children will be banned from walking or cycling to school even if accompanied by a parent. The father of one pupil at North Downs primary school commented: “It would be a national scandal if a school situated within view of the 2012 Box Hill Olympic cycling race introduced a policy that forces pupils into cars.” Surrey County Council is willing to pay for taxis if needed. No wonder that, as we report today, Surrey devoted £23.5 million last year to taxis for schoolchildren. The national total spent by councils is thought to be £700 million a year.

How has it happened? Every morning during term time the roads are jammed with harried parents, hurrying from breakfast to work and delivering children to the school gates as if they were delicate orchids wrapped in cellophane. Parents would like their children to have more exercise, more fresh air, be less prone to getting podgy, be more self-reliant. Instead they depend on wheels as much as Daleks and become no more self-reliant than Tamagotchis.

What would Wordsworth have become without walking on the fells, skating, boating, climbing trees and riding? Not a poet, at any rate. We have allowed a very large cultural shift to swaddle up our children and turn parents into chauffeurs – except when a taxi calls at the door, paid for by the council tax.